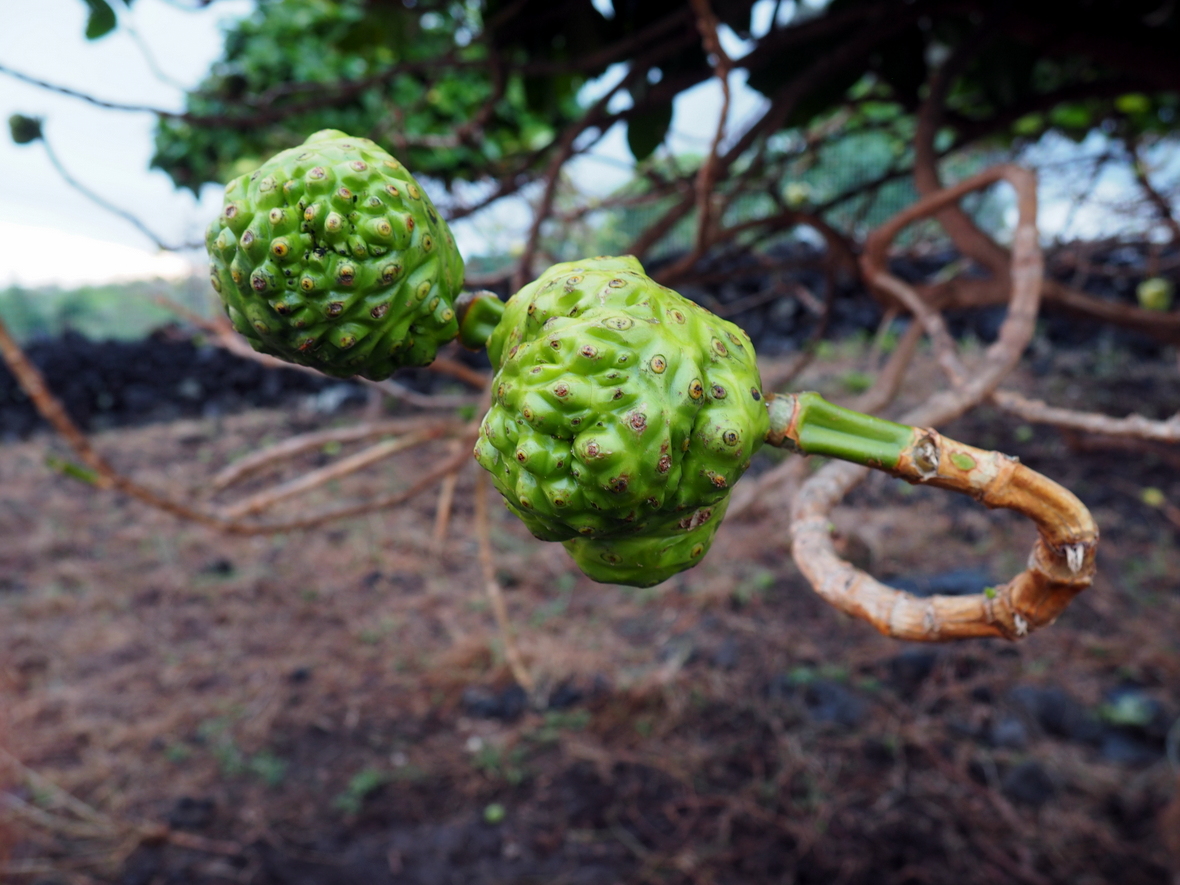 Meet noni. Morinda citrifolia. Among its many names, it is also called “vomit fruit” due to its pungent and revolting reek which, when the fruit is ripe, is described as “fresh vomit mixed with rancid garbage.” How is that for botanical description? Much to my dismay, the noni tree grows happily on the volcanic soil of the Hawaiian islands. The globular green fruits grow pale as they ripen, eventually falling to the ground and acting as banana peels in old cartoons, making the already unstable ground a slippery, stinky mess.  Nevertheless, noni has historically been considered a medicinal plant and famine food, and is touted today as a cure-all. That’s right: people eat and drink the stuff.

Despite its alien appearance and otherworldly stink, noni is quite at home in Hawaii. Originally brought to the islands from its native habitat in Southeast Asia, it is on the short list of plants important enough to the original Polynesian settlers to be imported by canoe roughly 1,700 years ago. As there were very few edible plants already growing on Hawaii when settlers first arrived, “canoe plants” were meant to inoculate the islands with plants of important and versatile use. Other canoe plants include taro, which is still widely cultivated throughout the islands and used in poi, and breadfruit – a starchy and delicious food source that still grows rampant near sites of ancient Hawaiian settlements.

Over the past few decades, noni has gained popularity as a cure-all elixir. Proponent’s of the fruit’s health benefits claim to use noni for everything from headaches and insomnia to AIDS and cancer. A reviewer of noni juice on Amazon.com, with frequent use of her CapsLock key, exclaims how noni not only rid her father of prostate cancer and hepatitist B, but also dissolved a cancerous mass in her cervix, helped her lose weight and, to top it off, gave her skin “more of a glow.” According to the National Institute of Health, preleminary studies of noni in the lab have shown “antioxidant, immune-stimulating, and tumor-fighting properties.” However, it continues that “…noni has not been well-studied in people for any health condition.” Even if noni has extra health benefits, any claims that it can cure or prevent disease should be met with a heavy dose of skepticism. Marketers of noni juice use the same asterisk-ridden, non-FDA-approved claims you can find with other unsubstantiated alternative cures – an easy way to swindle desperate people into believing they found an answer to their problems.

My first week on the farm, I was given a bracing shot of noni juice with breakfast. I spent the remainder of the day stacking rocks near the few noni trees on the property – slipping around in the rotten fruit and letting the acrid smell mingle with the unforgettable taste of the stuff. I will admit that, while those first days with noni were traumatizing, the smell has gotten more tolerable with familiarity. It is my goal to chomp into one of the fruits before I leave. Who knows, if I can keep it down, maybe I’ll live forever.